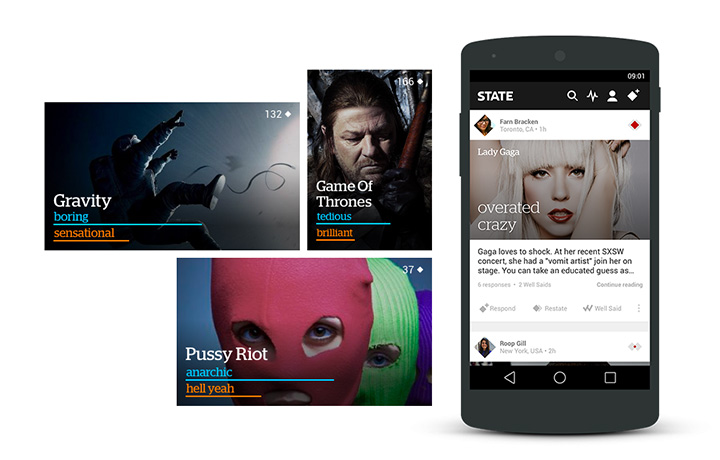 Some ideas are so right you know they will succeed one way or another. Even during the early years of flutter.com and Betfair, it was clear that the idea of an efficient internet marketplace for betting had to succeed, and overwhelm the incumbent bookmaker model, although it was far from clear how long it would take or which company would be the winner. I believe the ideas behind State have a similar rightness, and will end up influencing the social web in many different ways, whether or not State the organisation is itself the beneficiary.

Over several years there my main activity was trying to recruit a sufficiently talented team in Notting Hill that we could take on the challenges of defining and building an opinion network. And we weren't short of challenges. How to represent and disambiguate the subject of an opinion. Do you mean Harry Potter the movie, the first book, the series of books, he fictional character? How to represent the meaning of the opinion itself, with all the linguistic variance of regional differences, sarcasm, slang, double meanings and an ever-expanding vocabulary? How to wrap all that up in a simple and intuitive interface? How to visualise the spread of opinions on topics, geographically, by time? How to link you to similar or opposite minded people, and expose you to the corners of a debate? How to engineer all that as fast and reliable software, for web and iOS and Android? And of course, how to build a business out of it, linking to publishers, social networks and the big wide world?

I was lucky to share in such an intense period of creativity with the team at State for a few years, and I look forward to seeing where it ends up.