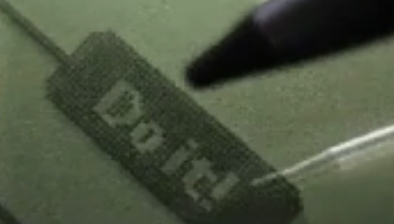 You know you're working in an R&D lab when you're making a device whose two commands are "blow" and "suck".

When I dropped in for a summer at Xerox's EuroPARC lab in Cambridge the Satchel project was already well underway. It was a magical system that could send and receive documents to and from printers, scanners, other people, even fax machines. That summer Mike and I made the new version on the legendary Apple Newton, 1995's handheld device of choice, with infrared for point-to-point communication, and switched to a newfangled way to identify the documents - using something called a URL. I also managed, with a bit of custom cabling and protocol fiddling, to connect the Newton to a radio modem, so we kind of had an early smartphone on our hands.

Mike's customary greeting as he came in around noon (he tended to work a later shift back then) was "Any breakthroughs?" It helps me to remind myself of that - expecting at least one breakthrough before lunch every day is an excellent goal.

A year or so later the obligatory Satchel demo video was made, but by then the "blow" and "suck" commands had been replaced with the context-sensitive "Do it!".