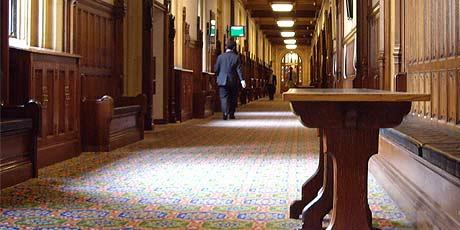 Infiltrating the corridors of power

I was sat on a leather bench in an enormously long wood-panelled hall, waiting for my turn to give evidence for the House of Lords Select Committee on AI, when I realised: people talk about the “corridors of power” - I was sat in an actual one. After several years interacting with government while working at Digital Catapult, I wasn't a complete beginner, but this was still nerve wracking: a grilling from Lords, Baronesses, Viscounts and even a Lord Bishop, with video and transcript to be published. While waiting, David Barber from UCL and I tried to figure out the correct forms of address. Your Lordship? Sir? I think we got away with it. We still have our heads.

That was the culmination of a long and arduous campaign to persuade the UK government that AI computation was a genuine problem for machine learning startups, despite the falling costs of cloud compute. What it taught me was that after more than a year of hard work, if you're lucky you can insert a sentence or two into policy, and that away from the theatre of parliamentary debates that we see on TV a lot of the real work happens in the committees. Along the way the journey included written and workshop contributions to Wendy Hall and Jerome Pesenti's report, Growing Artificial Intelligence in the UK, the Royal Society reports on Data management and use: governance in the 21st century and Machine learning: the power and promise of computers that learn by example, evidence to the All-Party Parliamentary Group as well as the House of Lords Select Committee on AI, talks at the Policy-UK Forum, Westminster Insight and eForum events, and quotes in the Sunday Times.

The good news was that the government decided we had a good case (helped along by the Machines for Machine Intelligence report by Libby and Anat) and InnovateUK funded the beginning of the Machine Intelligence Garage. The team took this programme, initially aimed at helping machine learning startups with AI computation and turned it into a popular and successful accelerator. As of the time of writing in 2019 there had been 8 cohorts of companies going through, an ethics process launched, and the beginnings of success stories.

Alongside the work on AI, my time at Digital Catapult was characterised by a terrifying breadth of industries and technologies to cover. So I was also an early member of the DCMS Future Communications Challenge Group looking at 5G, the group that is now called ImmerseUK looking at applications of immersive technologies, the Digital Engineering and Manufacturing Leadership group organised by Phill Cartwright, that gradually turned into the Made Smarter programme on industrial digitalisation for the UK, the Connected and Autonomous Vehicle Forum, the Industrial Advisory Group for ICT for InnovateUK (the UK government agency funding innovation), the IM-PACT group on intelligent mobility and a group pulled together to advise the HS2 high speed rail project on future technologies. Together with the Open Data Institute, we wrote a response to the Government Office for Science report on distributed ledgers, and probably many others lost in the depths of the internet!