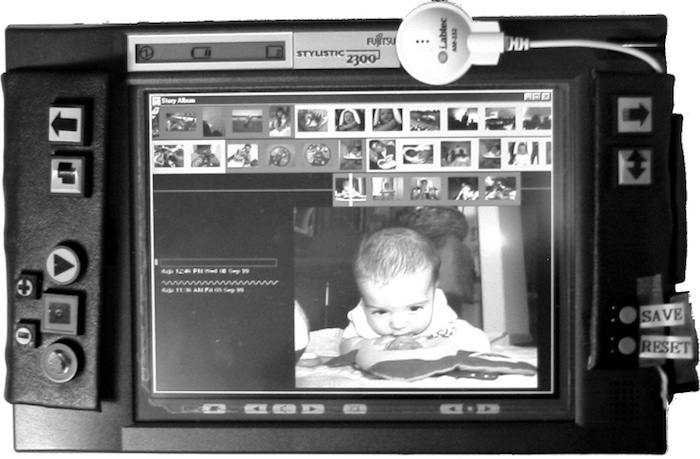 People tell stories as they look at photos together: grandmothers, grandsons, and everyone inbetween.

We had a big central meeting room at Ricoh's research lab up on Sand Hill Road. One day I wrote some code to take the photos from my digital camera (still a bit newfangled then) and turn it into a slide show set to Lust for Life (Trainspotting had clearly been a big influence). I tried it out on the big screen in the meeting room. My boss Greg wandered in to see what all the noise was. It was the beginning of a project.

Soon after we managed to hook up with Lonny, who was working on computer music intefaces. It was still a while before the advent of iPads, but we bought a Fujitsu touchscreen tablet and transformed it into a device that was subtly padded, nice to hold and had a bunch of special buttons. We designed an interface with a simple metaphor of "tracks" to look at photos, record and play back stories, with both the audio and the sequence of pictures. The best bit was that a wide range of ages could use it, and pass it around naturally.