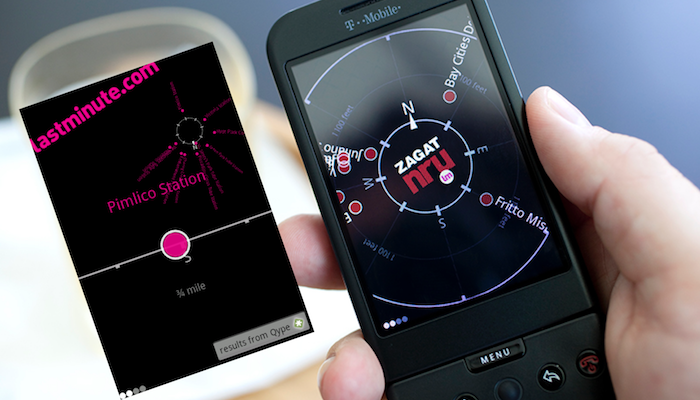 The most fun days in an innovation or R&D team are those when a team-mate comes along with a great new idea. To call Richard Lewis Jones an early adopter is definitely an understatement; when the first Android phone hit the UK he had to have one, and indeed was interviewed by the press as the first customer buying one. GPS was well established by then, as were accelerometers, but the compass was a new sensor as yet unexplored. The following Monday after a weekend's coding Richard came in with NRU ("Near You") basically working, named, designed and almost ready to launch.

Along with Wikitude it was the first augmented reality smartphone app. We'd hit the timing right and were featured in the Android Market, publicised broadly, recommended in French FHM, won a MEX award and followed it up with a partnership with Zagat and a US launch, and an iPhone version, once Apple launched the 3GS with a compass, that Robert Scoble called "the coolest thing I've seen in the UK" (with the possible exception of Spotify :).