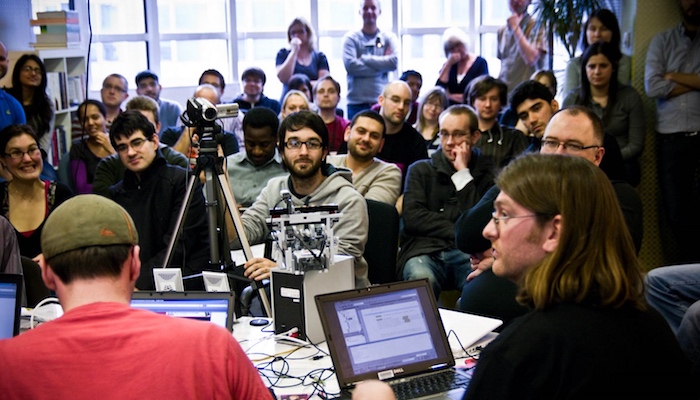 Sparking creativity and innovation in a large corporation can be a lonely and uphill struggle, but we were lucky as we created The Nest at lastminute.com to have an ever changing group of willing agitators to spread the word. Dominic Cameron is funny, erudite and an experienced technology leader, so was the ideal partner in crime, and Kim followed by Assunta invented and then excelled at a job that at times seemed to involve knowing the entire 2000-strong company across Europe individually.

Over time we organised over 100 filmed Lunch and Learn speakers, language classes, two business idea contests, one of which led to the creation of 60 web sites across Europe, work experience weeks for schoolkids, a 200-book library, a brainstorm room, visits from West End musicals, ten "big dinners" mixing up the company strata in open debate, 5 hack days coordinated internationally, birthday presents for everyone, all on a budget that mostly just paid for the sandwiches.

This job was social engineering more than software engineering; changing the culture of a big organisation is quite different to forming a creative team or individual innovation. But the rewards are equally satisfying - seeing a junior developer bypass every layer of process and management to successfully demonstrate an idea to the CEO, the new connections formed when discovering a kindred spirit in another department or country, or just the glow of pride from a team impressing their peers to win a hack day prize.