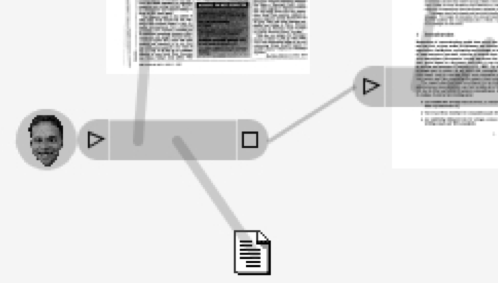 Greg Wolff definitely had the most accurate frisbee throw of anyone I've worked with, having been on a world-championship winning mixed Ultimate team, and a great tradition at Ricoh's R&D centre where we worked was the Friday lunchtime frisbee game. He was also intrigued by the terrible user interfaces of systems like voicemail, and correspondingly the loss of emotional texture in email or text messaging compared to voice. One of my projects there was to create a new system for creating and receiving messages that combined voice with a visual representation. The other of course was to try to catch the damn frisbee more often.

TouchVerse worked with a touchscreen and enabled a user to record voice messages and place corresponding visual bars on a canvas. At the same time, pointed-at documents would be placed on the canvas, with lines connecting them to the corresponding audio bar. So you could refer to this paragraph of a document while talking and a visual link would appear. The creator of a this hybrid voice + visual + pointing message could organise it visually, and it allowed the receiver a lot more control in playing back the different segments. In a way this was a more business-like analogue for the StoryTrack photo album, that was also a way to record stories comprising voice and pointing at things (photos in that case).

This interaction doesn't require any typing so works better for those who struggle with keyboards, and also allows the natural medium of voice to be used. However it is definitely unusual. The currently successful genres of communication are practiced and learned, both individually and culturally, over a long period of time. One of the bits of related research that has stuck with me ever since is the finding that the better you know someone the more channels of communication you use. Someone you know a little bit you may only see face to face, or only deal with via email. Someone you know well you'll communicate with over email, text, twitter, Facebook, face to face, phone, everything.

I ended up moving back to London shortly after this project, but it remains an area of interest that, despire the advent of iPads and such, still hasn't quite got to the mainstream.